School of Economics | Devaluation of the Indian Rupee
6490
post-template-default,single,single-post,postid-6490,single-format-standard,ajax_fade,page_not_loaded,,qode-title-hidden,qode_grid_1300,qode-content-sidebar-responsive,qode-theme-ver-11.1,qode-theme-bridge,wpb-js-composer js-comp-ver-5.1.1,vc_responsive

27 Mar Devaluation of the Indian Rupee

Indian Rupee value against US Dollar 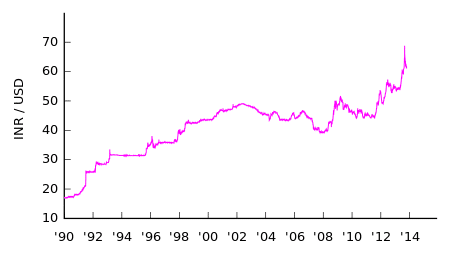 Another way of thinking about it:

This shows there has been a substantial fall in the value of the Indian Rupee against the US dollar.

When there is a devaluation in the Indian Rupee it means that Indian exports become cheaper, but imports are more expensive for Indians to buy.

In particular, a devaluation of the Rupee is bad news for Indians who need to import raw materials, such as oil and gold.

Causes of Devaluation in Rupee

Lack of competitiveness/inflation. The long-term decline in the value of the Rupee reflects India’s relative decline in competitiveness. In particular, India has a higher inflation rate than its international competitors. In November 2013, Indian inflation reached 11.24%. Therefore, there is relatively less demand for the rising price of Indian goods; this reduction in demand causes a fall in the value of the Rupee.

In the first quarter of 2013, the Current Account Deficit was 18.1 billion. The deficit was over 6.7% in last quarters 2012; the deficit has fallen to 1.2% in Q3 2013. However, the Economist notes that 75% of the deficit reduction is artificially related to reducing imports of gold through government restrictions. (See: Indian economy 2014) Therefore, there is still an underlying trade deficit, India will need to work on through increasing exports and competitiveness.

A current account deficit can be financed by capital inflows (on the financial account). But,  recently, India has been struggling to attract sufficient long-term capital investment. Some major companies have recently pulled out of foreign direct capital investment. This puts more downward pressure on the Rupee.

India is a net importer of oil. It has to buy oil in dollars. Therefore, rising oil prices worsen India’s current account and also weaken the Rupee. More Indian’s rupees have to be spent on buying oil.

Impact of Devaluation in Indian Rupee

A devaluation can boost domestic demand and short-term economic growth. However, this is not necessarily helpful for the Indian economy. India’s economy needs to concentrate on boosting productivity and long-term productive capacity, rather than relying on boosting domestic demand. The rapid devaluation has also caused a loss of confidence in international and domestic investors. With a history of quick depreciation, foreign investors will be more nervous of investing in India. The devaluation and inflationary impact will also discourage domestic investors, e.g. firms worried about future oil prices. This reduction in investment is damaging to long-term economic growth.

The concern is that high Indian inflation causes devaluation, which in turn feeds into more cost-push inflation. Thus it becomes a difficult to escape out of this unwelcome negative spiral of inflation-devaluation-inflation.

Policies to stem devaluation in Rupee

Devaluation of the Indian Rupee