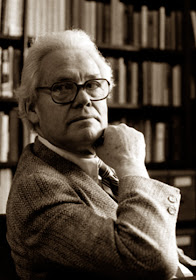 According to Musgrave, Dalton has proposed two principles of budget policy.

The first is that resources should be distributed among different directions in such a way as to equalize the marginal return of satisfaction for each type of expenditure.

Therefore the size of budget must be determined in such a way so that it results in maximum welfare to the society.

To illustrate the maximum welfare principle in the optimum budget determination, Musgrave uses the following figure :- 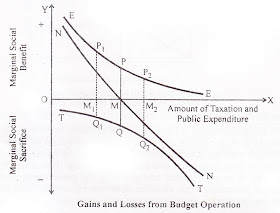 Explanation of above Musgrave’s diagram is given below :-

The ‘Curve TT’ indicating the marginal social sacrifice of successive units of taxation imposed, shifts upwards from left to right due to increasing marginal disutility or social sacrifice.

The ‘Curve NN’ measures the net benefit derived from successive additions to the public budget (by way of taxation and public expenditure) and is arrived by deducting TT from EE.

The ‘Optimum Size of Budget’ is determined at OM, where marginal net benefits are nil. Therefore, the Government must fix the amount of taxes and public expenditure equal to OM. At point M, the maximum-sacrifice approach to the determination of taxes is matched by maximum-benefit approach to the allocation of public expenditure, and the two aspects are combined in a general theory of budget planning.

At any point before M (i.e. M1), marginal social benefit (M1P1) will be greater than marginal social sacrifice (M1Q1) and marginal net benefits will be positive. Therefore, it would make sense to increase the taxation and public expenditure. Thus, there will be tendency to move towards point M.

At any point after M (i.e. M2), marginal social sacrifice (M2Q2) will exceed marginal social benefit (M2P2), and the marginal net benefits will be negative. Therefore, it would make sense to reduce the taxation and consequently reduction in public expenditure. Thus there will be a tendency to move towards point M. Thus, at point M, MSB = MSS. Therefore, according to Richard Abel Musgrave the optimum size of the budget is decided at a point where marginal net benefit is zero.

According to Musgrave the optimum size of budget is given by the point where marginal net benefit is zero. This point corresponds to the point of maximum social advantage as at this point MSB = MSS