School of Economics | The problem with printing money
6486
post-template-default,single,single-post,postid-6486,single-format-standard,ajax_fade,page_not_loaded,,qode-title-hidden,qode_grid_1300,qode-content-sidebar-responsive,qode-theme-ver-11.1,qode-theme-bridge,wpb-js-composer js-comp-ver-5.1.1,vc_responsive

25 Mar The problem with printing money

Readers Comment. Why doesn’t the Bank of England just print the money instead of borrowing the money?

Many often ask why government’s don’t print more money to deal with the problem of national debt.

The reason is that printing more money doesn’t increase economic output in any way –  it merely causes inflation.

Doubing the money supply, whilst output stays the same, leads to a doubling in price and inflation rate of 100%

Why is inflation such a problem?

More on problems of inflation

Governments borrow by selling government bonds/gilts to the private sector. Bonds are a form of saving. People buy government because they assume a government bond is a safe investment. However, this assumes that inflation will remain low.

Hyperinflation in Germany during the 1920s 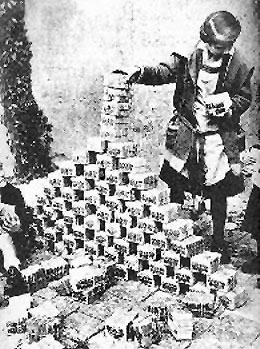 Inflation was so bad in Germany that money became worthless. Here a child is using money as a toy. Money was used as wallpaper and to make kites. Towards the end of 1923, so much money was needed, people had to carry it about in wheelbarrows. You hear stories of people stealing the wheelbarrow, but leaving the money.

Hyperinflation also occurred in Zimbabwe in the 2000s.

Printing money and the value of a currency

If a country prints money and creates inflation, then there will be a decline in the value of the currency.

Hyperinflation in Germany causes a rapid fall in the value of the German mark to the dollar.

In a period of hyperinflation, investors will try and buy a stable foreign currency because that will hold its value much better.

In a recession, with periods of deflation, it is possible to increase the money supply without causing inflation.

In the liquidity trap of 2008-2012, the Bank of England pursued quantitative easing (increasing the monetary base) but this only had a minimal impact on underlying inflation. This is because although banks saw an increase in their reserves, they were reluctant to increase bank lending.

However, if a Central Bank pursued quantitative easing (increasing the money supply) during a normal period of economic activity then it would cause inflation.

The problem with printing money