School of Economics | Who are the winners and losers from inflation?
6439
post-template-default,single,single-post,postid-6439,single-format-standard,ajax_fade,page_not_loaded,,qode-title-hidden,qode_grid_1300,qode-content-sidebar-responsive,qode-theme-ver-11.1,qode-theme-bridge,wpb-js-composer js-comp-ver-5.1.1,vc_responsive

02 Mar Who are the winners and losers from inflation?

Inflation is a continues rise in the price level. Inflation means the value of money will fall and purchase relatively fewer goods than previously. 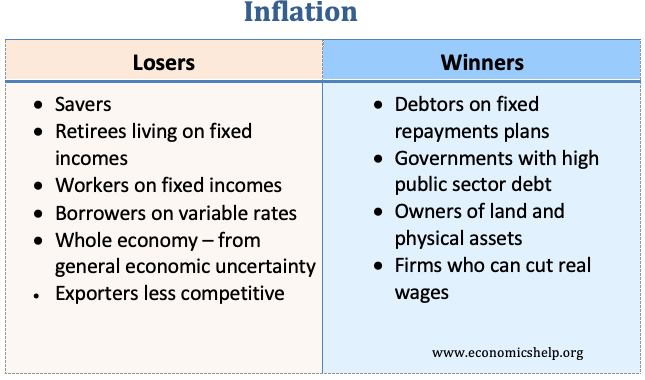 Savers. Traditionally savers lose from inflation. If prices rise, the value of money falls, and the real value of savings decline. For example, in periods of hyperinflation, people who had saved all their life could see the value of their savings wiped out because, with higher prices, their savings are effectively worthless. 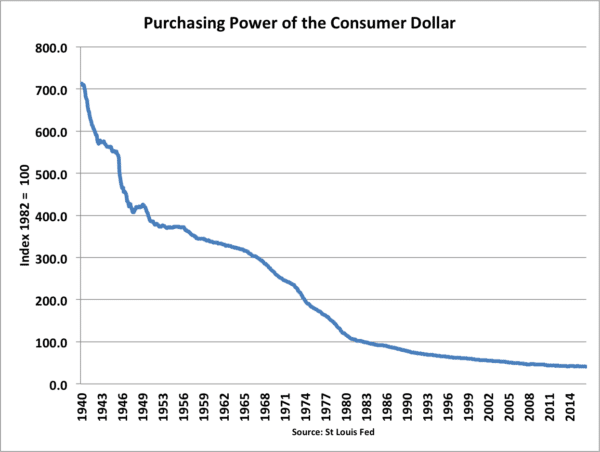 Savers are much more likely to lose out if we get both high inflation and low-interest rates. For example, in the aftermath of the 2008 credit crisis, inflation rose to 5% (due to cost push factors) but, interest rates were cut to 0.5%. Therefore, savers lost out during this period.

Another potential loser from inflation are workers who are stuck on fixed wage contracts. Suppose that workers have a wage freeze and then inflation is 5%. It means at the end of the year, their wages purchase 5% less than at the start of the year. 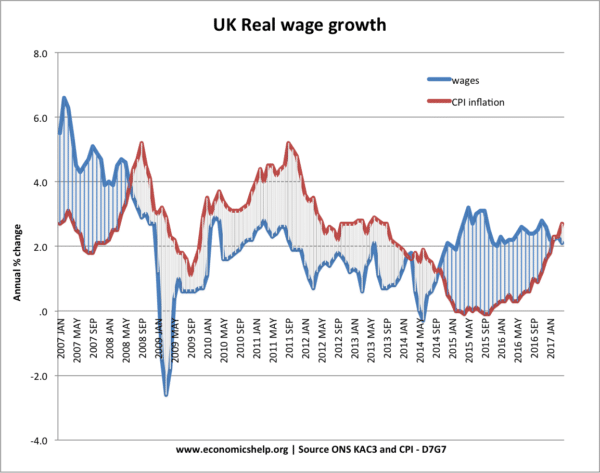 In the period 2008-14, CPI inflation was above nominal wage rises – causing a decline in real wages.

Even though inflation was relatively low (by UK historical standards) – it left many workers with a fall in real wages.

A rise in inflation can cause the government/central bank to increase interest rates. This will lead to a higher borrowing rate. Therefore mortgage owners who have variable mortgage rates can see significant rises in their mortgage payments. 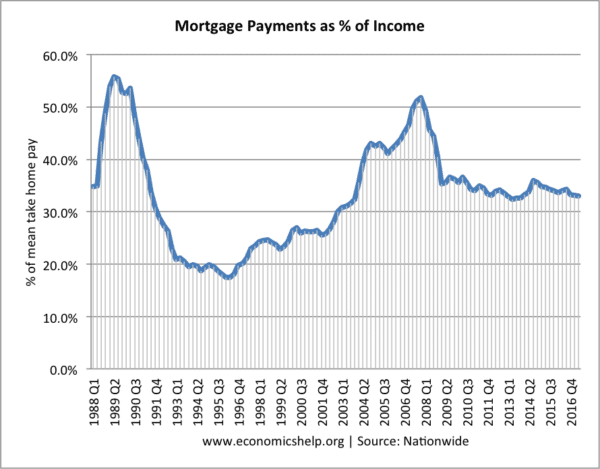 For example, in the late 1980s, the UK experienced an economic boom, economic growth was high, but inflation increased close to 10% – as a result of the overheating economy, the government increased interest rates. This saw a rapid rise in mortgage costs – which were largely unexpected. Many homeowners found they couldn’t afford higher mortgage payments and so defaulted on mortgage payments.

The high inflation of the 1980s indirectly caused mortgage payments to rise and many to lose their home.

If inflation is high and variable, it creates uncertainty for both consumers, banks and companies. There is a reluctance to invest and this can lead to lower economic growth and less job availability. Therefore, in the long-term, higher inflation is associated with a deterioration in economic prospects.

If UK inflation is higher than our competitors, then exporters will see a decline in demand and struggle to sell their goods.

High rates of inflation can make it easier to pay back outstanding debt. Business will be able to increase prices to consumers and use the extra revenue to pay outstanding debts. 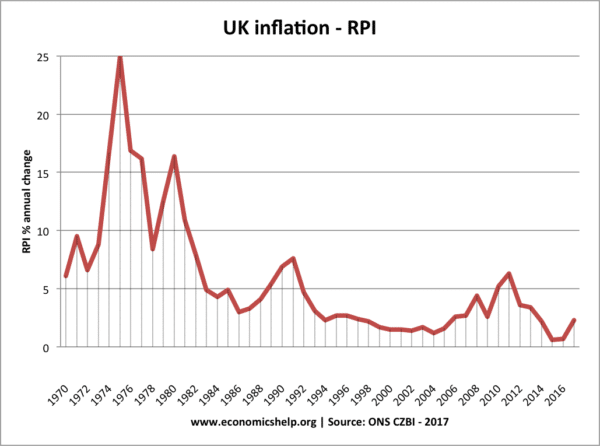 In the 1970s, unexpected inflation (from oil price shock) helped to reduce governments debt burden in various countries such as the US. 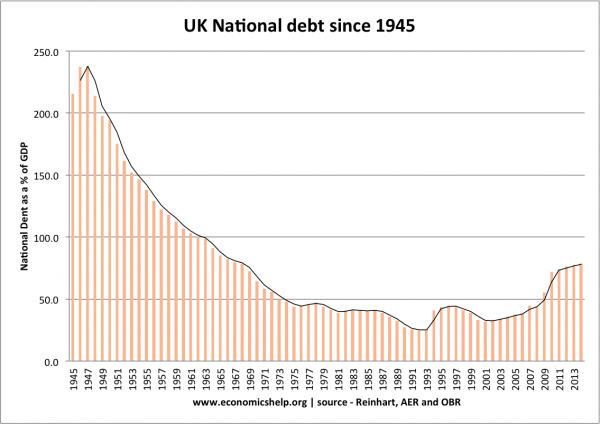 Between 1945 and 1991, the nominal value of government debt rose, but inflation and economic growth helped the value of national debt to fall as a percentage of GDP.

In a period of hyperinflation, those with savings can see a rapid fall in the real value of their savings. However, those who own physical assets tend to be protected. Physical wealth – such as land, factories and machines will retain their value.

In periods, of hyperinflation, there is often increased demand for assets, such as gold and silver. Gold cannot be subject to the same inflationary pressures as paper money as it cannot be printed.

However, it is worth bearing in mind, that in a period of inflation, buying gold is not guaranteed to increase in real value. This is because the price of gold can also be subject to speculative pressures. For example, the price of gold spiked in 1980 and then fell afterwards.

However, in periods of hyperinflation, holding gold is a way to protect real wealth in a way money is not.

In periods of negative real interest rates, it tends to increase profit margins for banks With base rates close to zero and very low saving rates, lending rates are higher than saving rates.

A good example of extreme inflation is Germany in the period 1922-24, the inflation rate reached astronomical figures.

Middle-class workers who had put a lifetime of savings into their pension fund found that in 1924, the pension fund was worthless. After working for 40 years, one middle-class clerk cashed his retirement fund and used it to buy a cup of coffee.

In this hyperinflation, it led to great fear, uncertainty and confusion. People responded by trying to buy anything physical – like buttons, cloth – anything that might hold value better than money.

However, not everyone suffered as much. Farmers did well because the price of food continued to rise. Business who had borrowed large sums found that their debts had effectively disappeared due to inflation reducing the real value of debt. These business could buy up over firms who had gone out of business due to the costs of inflation.

Those who owned land or physical assets were able to maintain their wealth.

This kind of very high inflation creates significant grievance as inflation can appear like an unfair way to redistribute wealth from savers to borrowers.

Who are the winners and losers from inflation?