School of Economics | How does the stock market affect the economy?
6476
post-template-default,single,single-post,postid-6476,single-format-standard,ajax_fade,page_not_loaded,,qode-title-hidden,qode_grid_1300,qode-content-sidebar-responsive,qode-theme-ver-11.1,qode-theme-bridge,wpb-js-composer js-comp-ver-5.1.1,vc_responsive

19 Mar How does the stock market affect the economy?

One well-known joke is:

Stock markets have predicted 10 out of the last three recessions.

The point is a rapid fall in share prices, doesn’t necessarily mean the economy is doing badly.

The 1987 stock market crash (where shares fell 25% in value) didn’t reflect serious economic problems, and the world economy continued to grow at a decent pace.

However, the fall in share prices 2008/09 was reflecting the real economic problems and perhaps contributed to economic downturn.

Plummeting share prices can make headline news. But, how much should we worry when share prices fall? How does it impact the average consumer? And how does it affect the economy?

Economic effects of the stock market

The first impact is that people with shares will see a fall in their wealth. If the fall is significant, it will affect their financial outlook. If they are losing money on shares they will be more hesitant to spend money; this can contribute to a fall in consumer spending. However, this effect should not be given too much importance. Often people who buy shares are wealthy and prepared to lose money; their spending patterns are usually independent of share prices, especially for short-term losses. Also, only around 10% of households own shares – for the majority of consumers, they will not be directly affected by a fall in share prices.

Anybody with a private pension or investment trust will be affected by the stock market, at least indirectly. Pension funds invest a significant part of their funds in the stock market. Therefore, if there is a serious and prolonged fall in share prices, it reduces the value of pension funds. This means that future pension payouts will be lower. If share prices fall too much, pension funds can struggle to meet their promises. The important thing is the long-term movements in the share prices. If share prices fall for a long time, then it will definitely affect pension funds and future payouts. This may cause households to have lower pension income, and they may feel the need to save more in other terms.

Often share price movements are reflections of what is happening in the economy. E.g. a fear of a recession and global slowdown could cause share prices to fall. The stock market itself can affect consumer confidence. Bad headlines of falling share prices are another factor which discourages people from spending. For example, the stock market falls of 2008/09 reflected the fall in confidence. On its own, it may not have much effect, but combined with falling house prices, share prices can be a discouraging factor. However, there are times when the stock market can appear out of step with the rest of the economy. In the depth of a recession, share prices may rise as investors look forward to a recovery two years in the future.

Falling share prices can hamper firms ability to raise finance on the stock market. Firms who are expanding and wish to borrow often do so by issuing more shares – it provides a low-cost way of borrowing more money. However, with falling share prices it becomes much more difficult.

How does the stock market affect ordinary people? 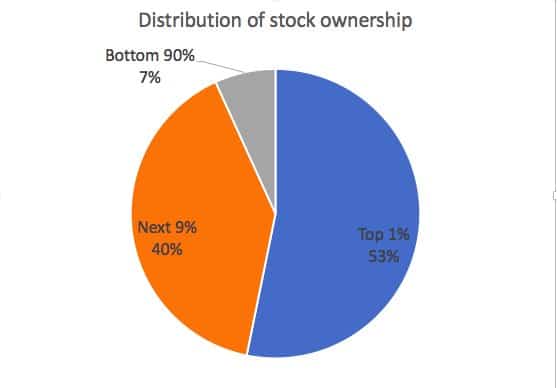 However, most shares are owned by the richest 10% of income owners. According to this paper on middle-class wealth, the poorest 90% of income earners – own just 7% of all equity. So a fall in share prices primarily affects the top 10% of wealthy households.

3. Short-termism. It could be argued workers and consumers can be adversely affected by the short-termism that the stock market encourages. Shareholders usually want bigger dividends. Therefore, firms listed on the stock market can feel under pressure to increase short-term profits. This can lead to cost cutting which affects workers (e.g. zero contract hours), or the firm may be more tempted to engage in collusive practices which push up prices for consumers. It has been argued that UK firms are more prone to short-termism because the stock market plays a bigger role in financing firms. In Germany, firms are more likely to be financed by long-term loans from banks. Typically, banks are more interested in the long-term success of firms and are willing to encourage more investment, rather than short-term profit maximisation.

How does the stock market affect the economy?